How did eruption impacts vary around the volcano?

For purposes of description, the eruption disturbance gradient is simplified into six discrete disturbance zones. The following is a brief description starting with the most heavily disturbed zone closest to the volcano and working outward toward the margins of the blast zone where the intensity of disturbance was lower. 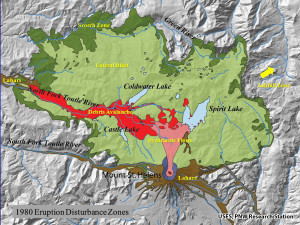 Disturbance zones created by the 1980 eruption.

Pyroclastic flows: Fiery pumice and gases flowed down the north flank of the volcano during the 1980 and subsequent eruptions as eruptive plumes collapsed and pulses of material spilled out of the crater. Due to extreme temperatures (800°F,425°C), no organisms survived or organic material remained on the pyroclastic flow deposits north of the crater. 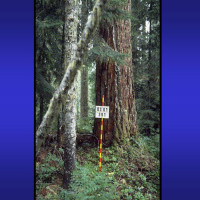 Prior to 1980, the valley north of the volcano was cloaked in old-growth forest. Signboard marks a vegetation plot. 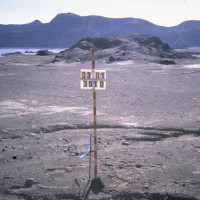 All traces of pre-eruption forest were erased. Signboard marks the same location.

Debris avalanche (landslide): A heterogeneous deposit composed of large mounds and depressions produced when the north side of the mountain collapsed in one of the largest landslides in recorded history. In less than 10 minutes, the landslide buried a 20 square mile area (60 km2) of the North Fork Toutle River valley to an average depth of 150 feet (45 m). Plant survival was limited to a few individual plants that sprouted from root fragments that ended up on the surface of the deposit. 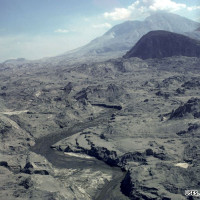 Massive chunks of the volcano, called hummocks, were transported down valley. 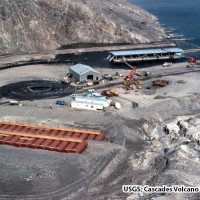 A temporary pumping station was used to keep Spirit Lake from overtopping the dam formed by the landslide until an outlet tunnel was completed. 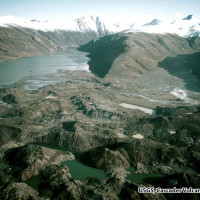 Lahars (mudflows): Flood waters from melting glacial ice and the drainage of water-saturated deposits produced cement-like slurries that swept downstream from the volcano. Lahars scoured and buried more than 100 miles (160 km) of river channel. Survival was limited to a few individual plants that sprouted from roots swept downstream. 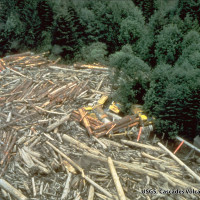 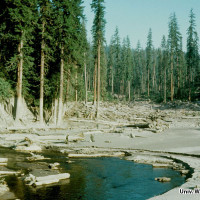 The maximum height of the lahar is evidenced by mud marks on trees 26 feet (8 m) above the river. Note scientists and helicopter for scale.

Lateral Blast: When the north side of the volcano collapsed it unleashed a sideways explosion that knocked over and scorched 230 square miles (600 km²) of forest. The speed of the blast ranged from 220 to 670 miles per hour (360-1080 km per hour). On ridges immediately facing the volcano the blast was powerful enough that it shredded the trees or ripped them out of the ground (tree removal zone). The blast flowed up and over ridges and swirled around steep mountain topography. Trees up to 17 miles (27 km) from the volcano were felled by blast (blowdown zone) and scorched by hot gases (scorch zone). 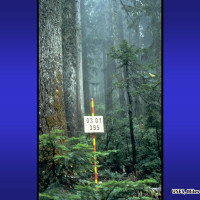 Vegetation plot in old-growth forest, prior to the 1980 eruption. 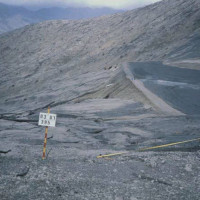 Repeat photo shows effects of the blast that toppled trees and ripped them from the ground (blast direction is from left to right).

Scorch (standing dead tree zone): Fifteen miles (25 km) from the volcano, the blast slowed to the point where it no longer carried enough force to knock the trees over but remained hot enough to kill them. The blast force had dissipated to a point where it dropped much of the fragmented rock it was carrying and the hot, blast gases ramped upward. The rapid rise of blast gases resulted in a narrow band of standing dead trees marking the outer boundary of the blast zone. 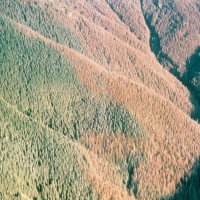 A band of standing dead trees marks the outer boundary of the blast zone. 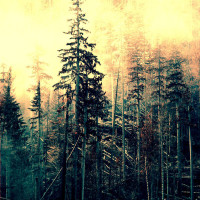 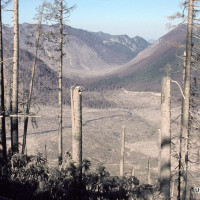 Standing dead trees along the northern edge of the blast zone. 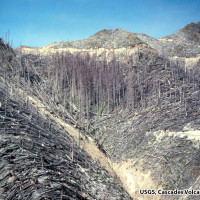 The blast moved like a roller coaster, ramping up and over steep ridges leaving behind pockets of standing trees.

Ashfall: The massive landslide and lateral blast was followed by a vertical ash eruption that continued for nine hours. The ash cloud was blown northeast by prevailing winds and eventually encircled the globe. Deposits of ash and pumice ranged from more than three feet (100 cm) deep near the volcano to traces of ash 500 miles (800 km) to the east. 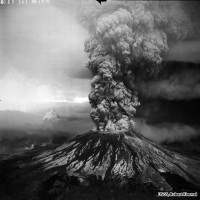 A massive ash column 15 miles high rose from the crater. 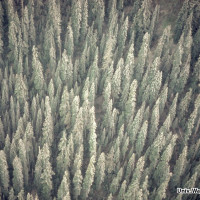 The ash covered nearby forests, retarding tree growth during the first year after the eruption. 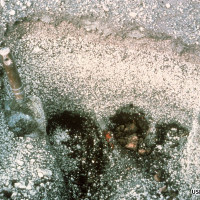 Cross-section of the 1980 ash deposit shows layers of fine ash and popcorn-sized pumice.