What is the long-term outlook for wildlife?

Given an area with ample food supply and little human disturbance (public access and hunting is restricted immediately north of the volcano) elk herds have expanded dramatically. Elk viewing is a popular activity among Monument visitors. The Washington Department of Fisheries and Wildlife estimates that populations have returned to near pre-eruption levels (1,750 animals in the area surrounding Mount St. Helens). In the years ahead, it is expected that elk and deer populations will continue to increase. In the absence of human intervention (e.g. hunting in the core of the blast zone) it is likely that populations will continue to increase dramatically until there is a string of hard winters and a dieback occurs due to a shortage of winter forage.

The winter of 1998 provided an example of the kind of population fluctuations that can occur as the development of forest plantations around the volcano proceeds and the forage supply decreases. A record snowpack (more than three times normal) in the winter of 1998 greatly reduced the forage available for elk and deer. More than 200 elk starved to death in the snow-covered blast zone that winter. The record snow pack of ‘98 had placed an additional stress on a population that had already begun to run up against the limits of the available food supply. The reduction in forage was due in part to the growth of forest plantations on private lands adjacent to the Monument. As the trees in the plantations have grown together, available sunlight for understory forage has been greatly reduced. What turned out to be a very stressful winter for elk at the volcano turned into a boon for scavengers and predators. Animals like coyote, bear and even wolverines were sighted in places in the blast zone where they had never been seen before. 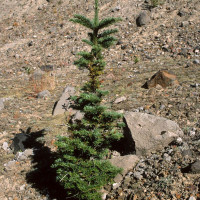 The lack of available forage in the blast zone is evidenced by heavily browsed trees. 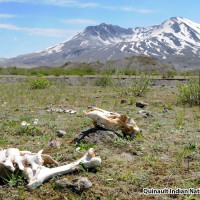 Bones are all that remain of a dead elk on the landslide deposit.