Why did so many plants and animals survive the eruption?

The early spring timing of the eruption meant that there were still late-lying snow banks on high mountain ridges that sheltered some forest plants from the full effects of the blast. Timing was also important to the survival of non-woody plants because the eruption hit the plants at a time when they were least vulnerable to scouring and burial by the blast. Late May is a time when plants on high mountain ridges were still dormant and many roots survived beneath the ash deposits. 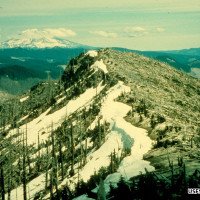 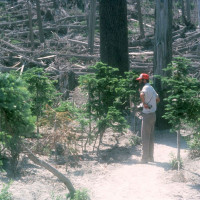 The most conspicuous plant survivors were patches of Pacific silver fir (Abies amabilis) and mountain hemlock (Tsuga mertensiana) trees that survived the eruption intact, bent over beneath deep snow banks. Other woody shrubs like huckleberry (Vaccinium spp.) and salmonberry (Rubus spectabilis) survived on snow-covered north-facing slopes or in isolated pockets behind steep ridges that deflected the blast.

Other chance circumstances contributed to plant survival throughout the 230 square mile blast zone. Scattered plants managed to survive on blocks of soil that clung to the root masses of blown down trees. 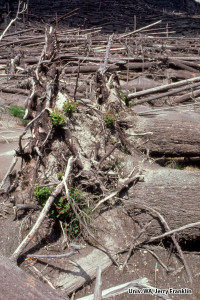 Huckleberries and other understory plants sprouted from soil on the root masses of blown down trees.

The most common means of survival was from rootstocks that sprouted from the surface of the pre-eruption soil where ash deposits were thin (less than six inches, 15 cm) or where the pre-eruption surface had been exposed in the bottom of erosion gullies. The most common survivors were weedy plant species such as fireweed (Epilobium angustifolium) and pearly everlasting (Anaphalis margaritacea) that sprouted from the original soil surface in areas that had been clearcut prior to the eruption.