Were there some places where nothing survived and how has life returned there?

The extreme heat of the pyroclastic flows sterilized the Pumice Plain north of the crater and nothing survived. As a result, the rate of vegetation development has been slower than that observed in other disturbance zones. Vegetation establishment was also slowed by an absence of biological legacies (remnant organic matter, nutrients, seeds, etc. from the pre-eruption forest.) These are important ingredients for successful seedling establishment. Another factor that slowed the rate of re-establishment is the area’s comparatively greater distance from undisturbed forest outside the blast zone and its potential seed sources. 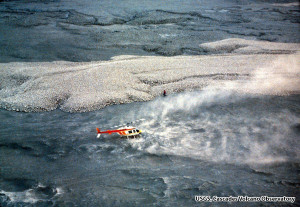 Immediately after the eruption there were no signs of life on pyroclastic flows north of the crater.

Two years after the eruption, scientists found the first plant on the Pumice Plain. Prairie lupine (Lupinus lepidus) is a hardy subalpine plant adapted to the upper slopes of Mount St. Helens. Scientists believe that the lupine probably originated from a seed that washed into the valley from a plant that sprouted in an erosion gully on the volcano. Prairie lupine is a particularly successful colonizer because of its ability to obtain nitrogen through an association with nitrogen-fixing bacteria on its roots. 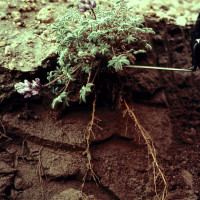 Prairie lupine, note the tiny nitrogen-fixing nodules on its roots. 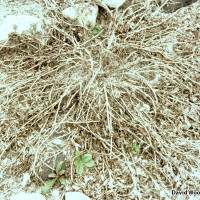 The lupines grew together into a dense mat and each fall dropped leaves adding nitrogen and organic matter to the pumice. When a lupine died it left behind a net-like structure of dead stems that helped trap windblown seeds and provided a favorable seedbed for colonization of other plant species. The lupine, thus, helped pave the way for the establishment of other plant species that followed.

As plants established there was more and more forage available for elk. As the elk grazed, they deposited the seeds of grasses and other plant species in their droppings resulting in an increase in grass cover. The elk repeatedly clip-off trees and shrubs slowing the return of forest vegetation to the Pumice Plain. 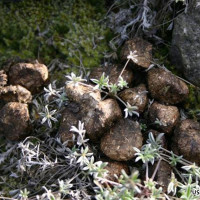 Elk droppings on the Pumice Plain. 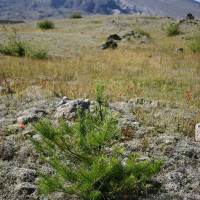 Grass cover and elk browsed trees on the Pumice Plain.