How were birds affected by the eruption?

Bird survival was restricted to areas on the margins of the blast zone where ashfall was the only disturbance. Recolonization of the blast zone occurred very quickly (hours, days, weeks) due to the tremendous dispersing capability of birds. Geologists working in the steaming crater experienced the tremendous dispersal capability of birds first hand as they were dive bombed by hummingbirds attracted to their bright orange flight suits (the birds thought they had stumbled upon the largest flowers they had ever seen!).

Ten years after the eruptions, few species are present in the pyroclastic flow, debris avalanche and tree blowdown zones where vegetation recovery has been relatively slow. The common raven (Corvus corax), mountain bluebird (Sialia currucoides) and white-crowned sparrow (Zonotrichia leucophrys) are examples of species that have returned to the most heavily disturbed areas. The standing dead forests harbor species such as the American robin (Turdus migratorius), hairy woodpecker (Picoides villosus) and red-breasted nuthatch (Sitta canadensis) but lack many of the foliage loving species found in undisturbed forests. Ashfall areas support bird life similar to adjacent, undisturbed forested sites. In  time as the blast zone returns to a forested condition we should observe a return of bird life found in adjacent, undisturbed forests. 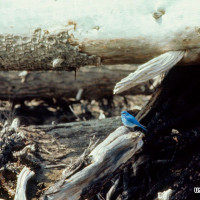 Birds like the mountain bluebird nest in cavities in standing dead trees. 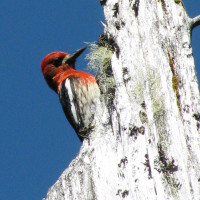 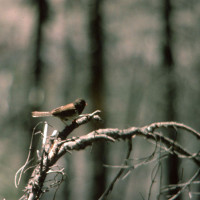 Ground foraging birds like the dark-eyed junco are thriving.