How were forests influenced by the eruption?

The 1980 eruption of Mount St. Helens blew down or scorched 230 square miles (600 square km) of forest. The failure of the volcano’s summit and resulting landslide and lateral blast produced a complex gradient of disturbance that extended 17 miles (27 km) from the volcano. Eruption impacts were greatest in the valley directly north of the volcano with complete removal of forest due to scouring and burial by the debris avalanche followed by sterilization by fiery avalanches of hot gas and pumice (pyroclastic flows). The effect of the eruption decreased with increasing distance from the volcano. By far the largest area affected was from ash that fell from the 15-mile (24 km) high ash column that drifted to the northeast, depositing measurable ash as far east as Montana and eventually encircled the globe. 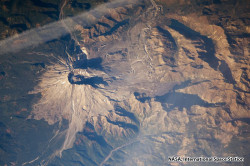 View of the Mount St. Helens blast zone from space. 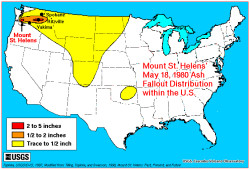 Distribution of ash deposited by the 1980 eruption of Mount St. Helens.