How were streams affected by the eruption?

Streams were affected differently depending on their proximity to the volcano and the degree of impact received. Streams were affected by the tremendous influx of nutrients leached from the blast deposits and by the large quantities of sediment introduced by erosion. Large masses of sediment were washed into streams filling streambeds and causing rapid channel changes and chronically unstable streambeds. The rate of recovery of streams varied with the quantity of sediment introduced, steepness of streambed and presence of large, stable logs in the stream channel. Large, stable logs anchored the streambed producing stable pools and riffles that aided the recovery of fish habitat. In the absence of large, woody debris fish habitat has been slow to recover. Fish that survived under ice-covered lakes have served as sources for the recolonization of blast zone streams. 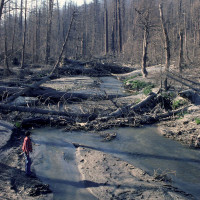 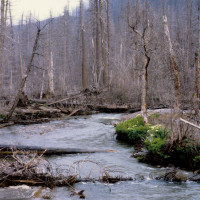 Logs helped stabilize streambeds, forming riffles and pools to the benefit of habitat for fish, 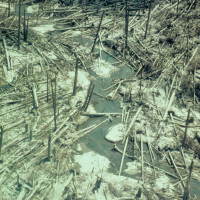 Streams like Clearwater Creek, nine miles northeast of the volcano, were filled with ash and logs.