What was plant survival and re-establishment like on the debris avalanche (landslide) deposit?

Surviving plants and other remnants of the pre-eruption forest (organic matter, nutrients, seeds, etc.) were rare on the landslide deposit due to its inorganic composition (lava rock, sand and ash). While scientists found a few rare plants that sprouted from root fragments, there was comparatively little plant survival and establishment during the first year after the eruption. 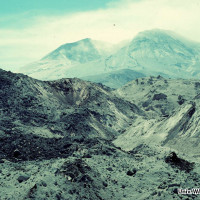 Chunks of the former top and insides of the volcano on the landslide deposit in July, 1980. 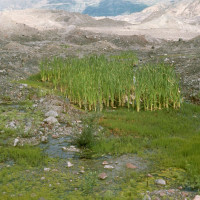 The first signs of plant establishment were on pond shorelines and in groundwater seeps.

Red alder (Alnus rubra) is a fast growing hardwood tree that has successfully colonized the debris avalanche. Red alder has an association with bacteria on its roots that enables it to fix nitrogen. The extra nutrients enable alder to grow at a rate of two to three feet per year (1 m) versus the 2 to 3 (5-8 cm) inch per year of growth (5-8 cm) of the evergreen trees that are colonizing the landslide.

The most well-developed alder stands are found on the edges of debris avalanche deposit where seeds from adjacent areas first landed and took root. The alder was also quick to establish in groundwater seeps and on pond margins where conditions were favorable for seedling establishment. 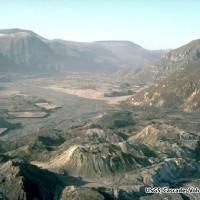 Landslide deposit shortly after the 1980 eruption. 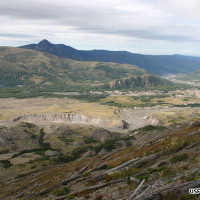 Two decades after the eruption red alder has established across much of the valley. 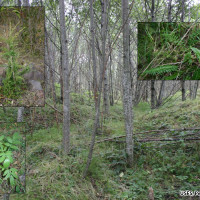 Sword ferns and other understory species are establishing in the shady alder forest understory.

Slow-growing Douglas-fir, western hemlock and noble fir trees are being overtopped by the rapidly growing red alder. Eventually, as the alder matures it will succumb to forces of gravity, snow and wind. As the alder breaks up, the slower-growing evergreen trees will be released and eventually overtop the alder. The valley will be cloaked in evergreen forest once again. 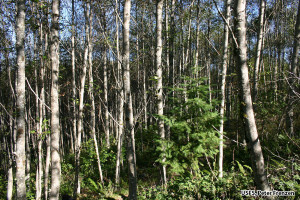 A Douglas-fir waits its turn, growing slowly in the shade of the alder forest.

An important factor in reshaping the landslide-filled valley has been the erosion of hill-sized chunks of the volcano and down-cutting of the North Fork Toutle River. The sediment-filled river shifts back and forth across the valley forming an active floodplain. Each year, even though countless seeds may sprout along the river, most are washed away and there is little to no vegetation development. 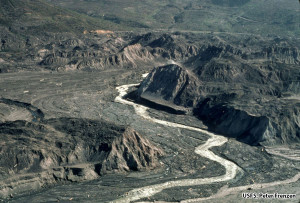 Very little vegetation has established on the constantly changing floodplain.