What were the first colonizers observed in the blast zone?

The first resident invertebrates observed in the blast zone, apart from ant colonies that survived below ground, were ballooning spiders and beetles. Ballooning spiders spin a parachute-like web that enables them to disperse long distances. These animals are scavenging predators that feed upon other insects that are blown into the area. On a summer day the upper air column is filled with flying insects that are swept aloft and carried great distances. Scientists estimate that 80 pounds (36 kg) of insects are deposited on each acre of the Monument during the four summer months that insects are active. Arthropod fallout, as it is termed, is not only an important source of food for scavenging arthropods but it provides an important source of carbon and other nutrients for future soil development on the volcanic deposits. In a sense, windblown insects were actually helping to pave the way for vegetation development at Mount St. Helens. 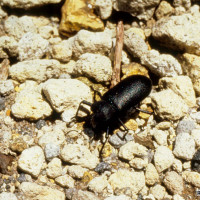 Spiders and scavengers like this carabid beetle survived by feeding on the carcasses of wind- blown insects. 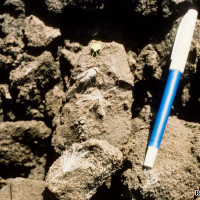 Seeds and insects on the crater floor demonstrate the effectiveness of wind-dispersal in the blast zone.